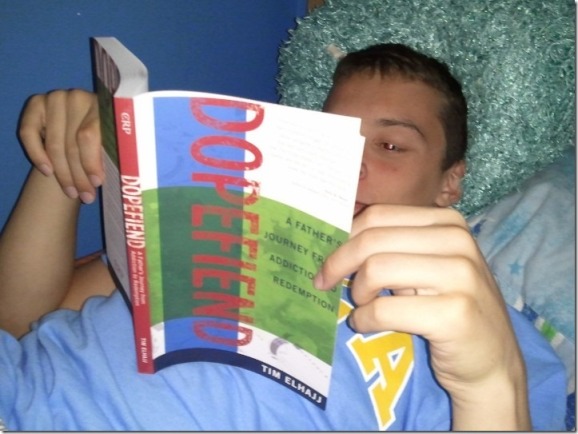 When the box of books arrived from the publisher earlier this month, Aaron, my youngest son (pictured) grabbed one from the stack off my desk and headed to his room. My daughter, Kennedy, grabbed one too, when I wasn’t looking. Later that night, walking from room to room to say our good-nights, I found each of them curled up on the bed, reading the book. How strange! I was still riding high that day from finally seeing the thing in print. I also felt giddy that my readership had increased by two right before my eyes. But I’ll also admit to feeling a little nervous. I mean, don’t get me wrong. My kids know I struggled with drugs and that now I am in recovery. And I haven’t shared anything in the book that I wouldn’t tell them myself, if they wanted to know. In fact, I’ve already told them quite a few of the stories, just sitting around the kitchen table. But still, I felt a little anxious about them reading the book. Would they like it? Hate it? Or—horror of horrors!—would they be embarrassed by it.

Kennedy finished her copy the same night she got it. She read it blazing fast, under two hours. At thirteen, she is an avid reader. She came into our computer room around 10 pm where I sat typing away at the keyboard. She stood by my desk, her arms hanging limp by her side. I looked over and she held the book up. “Finished it,” she said.

My first thought was: “You scanned? How could you?” Then I remembered something my AA sponsor always said: “It’s not about you, Tim.” She was standing there looking all wiped out, like a dishrag in a downpour.

“What did you think?” I asked.

“Great,” she said. She laid the book back on the stack with the others and turned to leave.

She is almost as tall as I am, but she doesn’t weigh nearly as much or have much bulk. She’s a lot of fun to hug because you can just fold her up inside your arms. I got her all tucked in under my chin and could smell the fruity shampoo she used on her hair.

We held one another for a little longer. “You want to talk?” I asked.

Holly told me that Kennedy asked her a number of pointed questions about our relationship from the later chapters of the book, which made me feel much better than it should have. I guess she didn’t scan after all. One of the questions had to do with the ceremony Holly and I had in our apartment when we got married. I had already relayed this story to Kennedy one night during evening prayers, but the book has the more adult version, where Holly (who rarely cusses) calls me a bastard.

I believe Aaron is still working on the book. Later this month, I get to pass off the a copy of the book to my #1 son, who hasn’t read it yet. I’ll keep you posted.

3 thoughts on “Newest Members of the DOPEFIEND Fan Club”